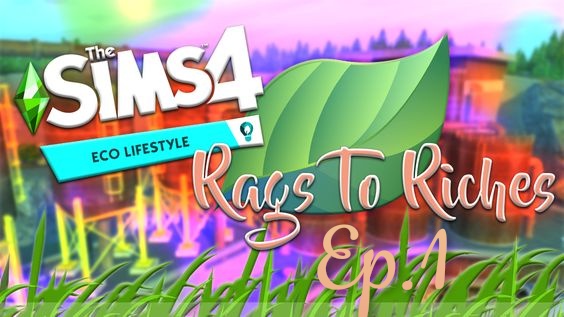 Today I am starting the Legacy rags to riches challenge if you have never heard of it before, I talk more about it in my previous post. For my first generation of this challenge, I am going to use a female sim, her name is Elena Redkey. I gave her the Eco innovator asperation and the following traits: maker, green fiend, and, recycle disciple. I then moved her into Evergreen harbor (this is the world that comes with eco-lifestyle) and changed her money to 0.

Elena is a young adult, female sim who moved into Evergreen harbor and wanted to make it nice again, make it a home for her.  She spent most of her time earning voting points and building skills.  She wanted to make everything herself, she did lots of dumpster diving and diving for deals gave her lots of old plumbing to fix. This generation of the challenge was pretty because when you use the dumpsters and dive for deals your sim has a high chance of getting broken and dirty plumbing. My sim spent a little bit of time repairing it and there were 2,000 dollars! Many times I subtracted money to make it a little bit harder on myself but she just kept getting more deals.

Elena used her community points to change the community lot to maker space so she could use the woodworking bench and fabricator until she could afford her own. She also used her points to make Port Promise (the neighborhood she lives in) nice. After a while, she built herself a house and was just working on furnishing it with all of the things she made with her high-level handiness and fabrication skill. Stick around for the next post of this generation. There will probably be two or three posts for the 1 generation.